This article was first published in The Conversation.

The use of image and performance enhancing drugs – in particular steroids – is a growing area of concern globally.

The use of these drugs has traditionally been limited to elite athletes and professional bodybuilders. But now their use is becoming normalised as part of a fitness and beauty regime for people who want to gain muscle, become leaner, and improve their appearance.

Several population studies have shown the use of image and performance enhancing drugs in Australia is relatively low. However, the dramatic increase of steroids detected at the country’s borders, and the number of users accessing needle and syringe programs, seem to indicate otherwise.

Number of performance- and image-enhancing drug detections at the Australian border, 2005–06 to 2014–15. DIBP

If Australia is to respond to image and performance enhancing drug use effectively, we need to improve our prevention and harm-reduction strategies – and not merely further criminalise users.

The most-researched (and targeted) image and performance enhancing drugs are steroids. But other examples include clenbuterol (to lose weight) and melanotan II (a tanning agent).

The inappropriate and excessive use of these drugs has been associated with a range of negative physical and psychological health consequences. Steroid use, for example, has been linked to high blood pressure, heart attack, stroke, acne and skin infections, liver damage, tendon rupture, premature baldness and stunted bone growth in adolescents. There are also psychological implications such as addiction, mood syndromes, and body image disorders.

Another issue is that the widespread use of illicitly manufactured products sourced through the black market puts drug users at risk of adverse reactions to tainted products.

In addition, as many of these substances are injected, there are potential harms from unsafe injecting practices. For example, research has found that 41% of Australian men who injected steroids reported an injection-related health problem such as such as fevers, scarring and abscesses.

In Australia, increases in the detection of these drugs at the border, coupled with contested concerns about links to organised crime, has led to greater levels of law enforcement.

Queensland, Australia’s steroid capital, reclassified steroids a schedule-one drug in 2014. This means they are now classed alongside heroin, cocaine and ice in the highest category of dangerous illicit drugs.

Under this legislation, the maximum penalty for possession or supply of steroids is 25 years’ imprisonment. Similar tough penalties apply in New South Wales and Victoria.

However, there is little evidence that tougher penalties have resulted in reductions in steroid availability. The total number of seizures at the border fell in 2013-14. But there is evidence of increases in recent years.

The Australian Crime Commission suggested in 2015 that any decrease in border interceptions could be the result of an increase in domestic production, coupled with increasingly easy access to drugs over the internet.

That growth in steroid use is most apparent in jurisdictions where recent legal changes have increased penalties suggests enhancing law enforcement measures may be an ineffective response to steroid use. Other research on the impact of drug policies on other illicit substances have reached similar conclusions. 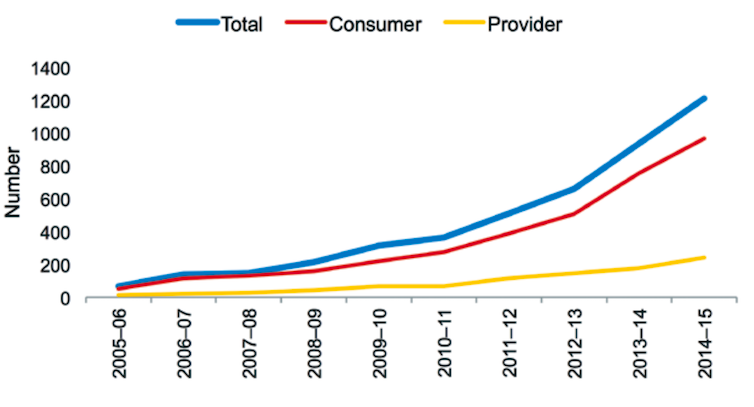 As is the case with drug use broadly, users of enhancement drugs can be considered rational consumers who make a deliberate choice to use steroids to achieve a desired outcome.

But social and cultural factors are also very influential in the decision to use drugs. Research suggests people considering drug use rarely take the illegality of a particular substance into consideration.

Increasing penalties associated with the use and possession of image and performance enhancing drugs are unlikely to prevent uptake or encourage users to stop. Instead, this may result in several unintended negative consequences. For one, it can hinder access to medical servicesand information by discouraging both users and healthcare practitioners from talking about drug use.

Other unintended negative consequences of criminal justice responses to such drug use include:

What about harm-reduction strategies?

Victoria’s existing harm-reduction initiative, the Steroid Education Project, lags far behind services for alcohol and other illicit drugs in its funding and resources. It provides face-to-face and over-the-phone counselling to steroid users, and delivers training to needle and syringe program staff.

Greater resourcing is required to extend this program to allow for training in needle and syringe programs across Australia, and to deliver training to GPs. Given the reluctance of users to engage with traditional drug services, GPs may be an important avenue for providing harm-minimisation messages to this group.

There is an urgent need to reconsider steroid use as a public health issue, as opposed to a criminal justice concern. Harsher penalties will do nothing to tackle misinformation about steroids or underlying issues of body image dissatisfaction, depression and mental health concerns among users.