Winners announced for the 2020 NDARC Awards 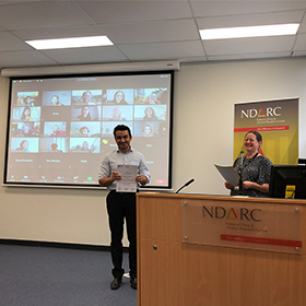 NDARC has acknowledged the outstanding work of its staff and students in the 2020 NDARC Awards.

The awards recognise the achievements of staff and students across all levels of NDARC. The ceremony was a hybrid event, with some nominees and presenters meeting in person and most staff and students logging on virtually to watch and cheer on their colleagues.

Two new awards were created this year; the ‘NDARC Excellence in Higher Degree Research Award’ which was open to all HDR students, and the ‘Wayne Hall Publication Award’ for a paper that demonstrates excellence.

Professor Wayne Hall was in virtual attendance, and presented the award named in his honour.

There was no award ceremony last year, so winners from two years were announced at this event.

Congratulations to the following recipients:

In memory of Jen McLaren, a highly valued researcher at NDARC, who sadly passed away in 2009. This award is to commemorate Jen and acknowledge someone who is showing dedication to research through their productivity and results.

Professor Margaret Hamilton AO is Chairperson of several Boards relating to NDARC, such as the NCCRED Board and DPMP Board.

The Margaret Hamilton Award is determined through the metric of the NDARC Research Support Scheme. All Level A and B staff are considered eligible for the award, except those who have won in the previous three years.

Professor Ian Webster AO was Director of NDARC at its inception in 1986.

The Ian Webster Award is determined through the metric of the NDARC Research Support Scheme. All Level C staff are considered eligible for the award, except those who have won in the previous three years.

This is a new award, open for all NDARC HDR students. The winners of this award have shown excellence in research.

The Hon. Kevin Rozzoli was founding Chairperson of NDARC’s Advisory Board.

The NDARC Kevin Rozzoli Community Impact Award is to acknowledge the achievements of NDARC researchers. The nomination must contain evidence of public health impact (such as resulting in a change in practice or in policy) and transfer of research findings for the wider benefit of the community.

Project: Review of cannabis and cannabinoids for medicinal purposes to inform the TGA’s advice to clinicians, clients and the community

Professor Wayne Hall AO was Director of NDARC from 1994-2001. He has been a prolific contributor to the drug and alcohol literature over his long career, and has mentored many students and staff around the writing of peer-reviewed publications.

This award recognises research outputs of research staff that have an important contribution to the field in alignment with NDARC’s core workplan areas. This award can be given to any NDARC student or staff member (HDR, professional and technical staff, and academic staff levels A-C) for a first-authored publication.