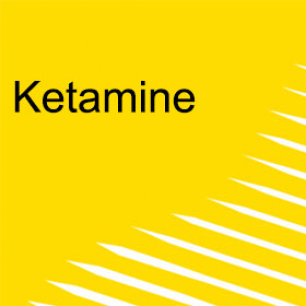 Ketamine is a dissociative general anaesthetic, classed as a hallucinogen when used illegally as a recreational drug.

Doctors and vets use ketamine because it produces analgesia (pain relief) and amnesia. It is also sometimes described as a horse tranquiliser due to its use in veterinary medicine.

When sold illegally, ketamine usually comes as a white crystalline powder, but it can also be made into tablets or dissolved in a liquid (ADF, 2019).

Ketamine is usually snorted through a small glass nasal inhaler (a ‘bumper’), although it can also be swallowed, smoked or injected.

The day following ketamine use, a person may experience:

Mixing ketamine with other drugs

The effects of using ketamine with other drugs, including over the counter prescription medication, is highly unpredictable.

The use of ketamine with psychostimulants (amphetamine, ecstasy and amphetamine) can put enormous strain on the heart, increasing the risk of a cardiovascular event (ADF, 2019).

The toxic effect of ketamine use is a psychosis-like state, sometimes referred to as a ‘k hole’.

There have been deaths associated with ketamine overdose, but they have been predominantly attributed to polydrug use. Signs of overdose include:

There is an established ketamine dependence and withdrawal syndrome. Withdrawal symptoms usually last for four to six days (Darke, Lappin & Farrell, 2019). They include:

Hallucinogens have the potential to give rise to psychotic symptoms, sometimes known as a ‘bad trip’. It’s been found that following a single dose healthy volunteers can experience both positive and negative psychotic symptoms.

Daily users of ketamine experience psychotic-related symptoms, especially among people who have a history of mental illness:

How many people use ketamine?

According to the Australian Institute of Health and Welfare, use of ketamine in the previous 12 months increased from 0.4 percent in 2016 to 0.9 percent in 2019, mainly due to recent use doubling among people in their 20s over this period (1.2 percent to 3.9 percent) (AIHW, 2020).