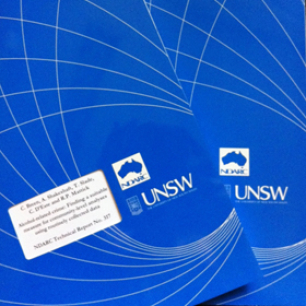 This report presents findings from a rapid assessment of performance and image enhancing drugs (PIEDs) trends in NSW. In 1997, Peters, Copeland, Dillon & Beel documented the range of substances used, cycle length and frequency, and users’ experiences of a range of physical and psychological harms. Since 1997, there has been no new Australian research in this area.

The methodology of the present study was based on an existing program of research, the Illicit Drug Reporting System (IDRS). There were three main sources of information used to document PIEDs trends in NSW:

These three data sources were triangulated to provide an indication of emerging trends in PIEDs use and markets. The 2005 findings were compared to the 1997 findings to give a broad indication of whether trends in the PIEDs market over time. The present study also examined the feasibility of using this methodology across all jurisdictions as an ongoing monitoring system for PIEDs (such as the IDRS model).

PIEDs use in the general Australian population
The 2004 National Drug Strategy Household Survey estimated that only 0.3% of Australians aged 12 years and older had ‘ever used’ AAS for non-medical reasons, and that a negligible number had used recently (Australian Institute of Health and Welfare, 2005). These figures are likely to under-estimate the number of PIEDs users, and other studies have found different rates of prevalence among different groups (e.g. regular gym goers, gay men, and young men).

Characteristics of PIEDs users interviewed
PIEDs users were not a homogenous group of men. One-third (33%) of the 2005 sample were aged between 17 and 25 years of age. Just under one-third (30%) of the sample were gay/bisexual men. Two-thirds (63%) of the sample had completed school to HSC level, and two-thirds (65%) had completed post-school qualifications (either a university degree or trade). Small proportions of the 2005 PIEDs user sample reported risk behaviours such as injecting other illicit drugs (25%), involvement in violent incidents in the six months prior to interview (23%) and involvement in criminal activity in the month prior to interview (35%). Overall, the demographic characteristics of the 1997 and 2005 samples were very similar, with three exceptions: the mean age of the 2005 sample was slightly higher (27 in 1997 and 32 in 2005); the 2005 sample had slightly higher rates of unemployment (5% in 1997, 15% in 2005) and the 2005 sample had higher rates of alcohol and other drug use.

The 1997 and 2005 sample characteristics, and the comments from KEs, indicate that PIEDs users maintain high levels of social and occupational functioning.

Patterns of use
The mean age of first use of PIEDs was 25.7 (SD 7.9), ranging from 15 to 58. The main substances used included AAS, prohormones (e.g. DHEA and androstenedione), HCG, HGH, insulin, anti-oestrogens, clenbuterol, stimulants (e.g. ephedrine, methamphetamine), diuretics and a range of over-the-counter dietary and sports supplements such as creatine monohydrate. Injectable human and veterinarian AAS remain the most popular and widely used PIEDs.

The 2005 sample used a mean of 2 AAS (ranging from 0 to 6 AAS) in their most recent cycle. Typical cycles were a median of 10 weeks, followed by a rest period of equivalent length. Cycle lengths ranged from 3 weeks to 52 weeks, indicating that small numbers of the group were using PIEDs weekly without a break. The median number of cycles per year was 2, ranging from 1 to 4. KEs reported that PIEDs use is generally seasonal, increasing over spring and summer months.

There appeared to be no major changes in the patterns of PIEDs use from 1997 to 2005. The two samples reported similar cycle lengths, frequencies and types of PIEDs being used. Since 1997 there has been a slight shift away from veterinarian AAS products, towards more human AAS products and other ‘prohormones’ such as DHEA and androstenedione. The 2005 sample also reported increased diversification in the range of other PIEDs used alongside AAS.

Motivations for use
The 2005 study reinforced the importance of body image as a motivation for PIEDs use, particularly the desirable effects on physique. The reported benefits of PIEDs use included: improved muscle definition, increased size, increased weight, increased strength, being able to train harder for longer, improved self-esteem, increased confidence, and positive feedback from others.

There was some evidence of occupational use of PIEDs among the 2005 sample. When asked to identify a category that best described their use of PIEDs, only 9% of the sample identified ‘occupational user’. While not identified as a primary motivation for their PIEDs use, 53% of the 2005 PIEDs user sample reported having worked in a profession where muscular strength and physical appearance were important (including jobs such as trades/labouring, fitness industry, security/armed services, adult entertainment industry and sales).

Harms
The 1997 and 2005 samples reported very similar experiences of harms relating to PIEDs use. The majority (97%) of PIEDs users had experienced at least one minor physical side effect, most commonly increased appetite, water retention, reduced teste size, acne, increased sex drive and sleeplessness. No PIEDs-related deaths were identified in databases that record drug-related deaths in Australia.

The majority of participants (87%) had experienced some changes in their mood or behaviour when using PIEDs. The positive effects included increased motivation, increased confidence, feeling more satisfied with body image and having an increased sex drive. The negative effects included irritability and aggression. Twenty-three percent of participants reported having been involved in an incident involving aggression or violence in the 6 months prior to interview. Just over one-third (37%) of participants reported having ever experienced ‘roid rage’.

A quarter (27%) of the sample reported experiencing mental health concerns in the six months prior to interview. Depression and anxiety were the problems mentioned most frequently. The 2005 sample reported symptoms of dependence, most frequently withdrawal symptoms. The most common withdrawal symptoms included desire for more steroids, dissatisfaction with body image, general lack of interest, depression and fatigue after stopping a cycle.

PIEDs users view their behaviour as ‘healthy’ and are wary of research and the ‘medical profession’. Subsequently, they may have a tendency to disregard the long-term negative effects. The vast majority (90%) of the sample believed that the benefits of PIEDs use outweighed the risks.

PIEDs markets
General comments from the 2005 sample indicated that, prior to 2000, AAS were more widely available, cheaper, and believed to be more frequently ‘genuine’ human or veterinarian products. PIEDs users reported that, in the years following 2000, there has been an increase in the number of fakes/counterfeits and new products such as ‘Dianabol paper products’ and ‘homebake’. Thirty-five percent of the sample reported having ever being sold counterfeit AAS.

The price of veterinary injectable AAS products ranged from $2 to $15 per ml. The price of human injectable AAS products ranged from $20 to $40 per ml. Oral AAS products were generally cheaper with prices ranging from $0.80 to $3.50 per tablet. Participants most often reported that prices of AAS had remained ‘stable’ over the last six months (40%). The most commonly reported price range for HGH was between $450 and $500 per week for a 4 to 6 week cycle. Clenbuterol was believed to cost between $150 and $200 per tub (of gel or powder), and between $2 and $7 per tablet. Anti-oestrogens ranged from between $2.50 to $10 per tablet. The price reports for other PIEDs were generally more variable and less reliable.

Information and help-seeking
PIEDs users seek information frequently from the internet, friends, doctors and gym contacts. Most health services do not give this group a high profile, and there are rarely posters, images, signs, and harm reduction materials that depict PIEDs users. Although 71% of participants reported accessing NSPs for clean injecting equipment, only 7% reported seeking information from an NSP. PIEDs users do not generally seek advice or support from AOD-specific services (such as NSPs, ADIS and treatment agencies) and do not identify with messages or services targeting ‘illicit drug use’. Small numbers of PIEDs users reported accessing mental health support from a ‘psychiatrist’ or a ‘counsellor’. KEs suggested that the ‘hidden’ nature of this group leaves them vulnerable to an over-reliance on ‘folk pharmacology’.