These trends are identified from the 2019 Ecstasy and Related Drugs Reporting System (EDRS) interviews with people who regularly use ecstasy and related illicit stimulants, and the Illicit Drug Reporting System (IDRS) interviews with people who regularly inject drugs. Drug Trends also draw on reporting from other Australian data sources (e.g., drug-induced deaths) that form part of the national illicit drug surveillance system. Reports of global cocaine manufacture have increased and, similarly, there have been reports of increased cocaine seizures and arrests in Australia. Past six month use of cocaine has increased again in the sample who regularly use ecstasy and related stimulants (EDRS), and perceived availability of cocaine is high. However, frequency of use is low, and the reported price remains stable. Whilst other countries have observed increases in cocaine-related deaths (e.g., England and Wales), our monitoring of drug-related deaths and hospitalisations suggest cocaine-related harms in Australia (as captured by these sources) remain low and stable. However, we will need to monitor these indicators of cocaine-related harms closely in the coming years, particularly if we see ongoing increases in availability and use, coupled with decreased price. 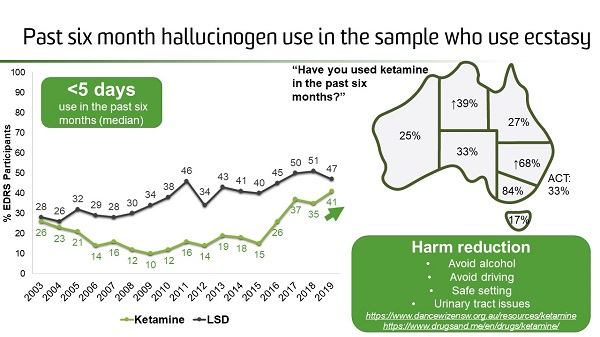 Recent use of ketamine and other hallucinogens such as LSD have been increasing among our sample of people who regularly use ecstasy (EDRS). The percentage reporting ketamine use varies substantially across the jurisdictional samples. For example, 84% of the 100 people interviewed in 2019 from Melbourne reported use in the past six months, but only 17% of the 100 people interviewed in Hobart reported such use. Whilst frequency of use is low, potential increasing ketamine use reinforces the need for harm reduction messaging, including:

There are very helpful online harm reduction resources for people who use ketamine and other illicit drugs. Examples include: Drugs and Me, Erowid and Tripsit.

E-cigarettes and tobacco use 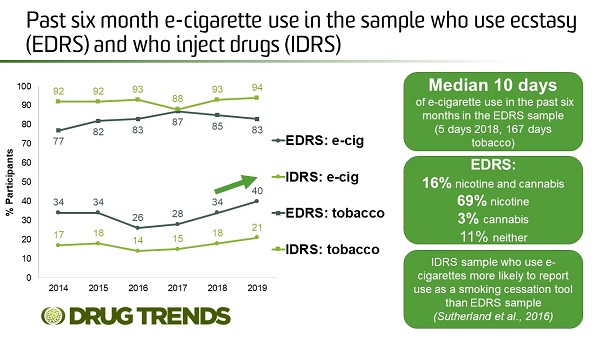 The use of e-cigarettes was relatively common amongst samples of people who inject drugs (IDRS) and people who use ecstasy (EDRS), and use has increased recently among the latter group. Previous research from our group has shown that IDRS participants predominantly use e-cigarettes as a smoking cessation tool, whilst EDRS participants mostly use e-cigarettes for recreational purposes. It is important to note that tobacco use is high amongst both samples. Around one-in-five EDRS participants who have smoked e-cigarettes report vaping cannabis. To our knowledge, there have been no cases of lung injury as in the US, with current reports suggesting that harms in the US may be linked to the addition of vitamin E acetate to e-cigarette/vaping products. 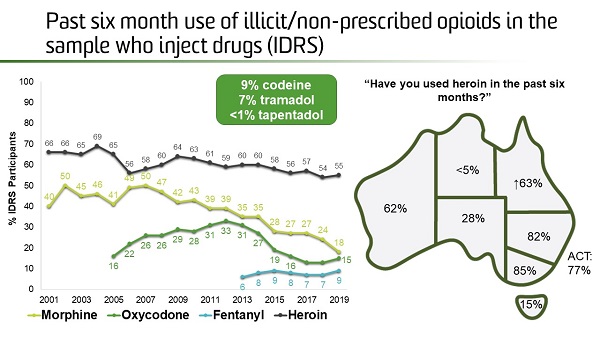 Past six month use of non-prescribed pharmaceutical opioids such as oxycodone and morphine has been declining in the sample who inject drugs (IDRS), although non-prescribed fentanyl use has remained relatively stable at around one-in-ten participants reporting recent use. The decline has been particularly salient since 2014, when there was a change in the primary controlled-release oxycodone formulation to a formulation with abuse-deterrent properties, and aligning with other sentinel data sources. Heroin use mostly remains stable amongst the sample who inject drugs, although there are stark differences across the jurisdictions and a concerning upward trend in opioid-induced deaths involving heroin. Most of the sample who regularly inject drugs (IDRS) have heard of naloxone, three-in-five have heard of take-home naloxone training programs, and one-in-three are trained in naloxone administration. However, the latter varies considerably across jurisdictional samples, ranging from less than 5% of participants in Hobart, Tasmania, to 51% of participants in Melbourne, Victoria.

One-in-twenty participants reported being resuscitated with naloxone by someone who had participated in training programs, and half of those who had participated in training programs reported resuscitating someone. These findings demonstrate the critical importance of ensuring naloxone is available to all who are at risk of experiencing or witnessing an overdose. Anyone can be trained to appropriately identify and reverse an overdose, and naloxone can be purchased over-the-counter in pharmacies by any member of the public. There were notable gaps in the percentage of both samples (EDRS and IDRS) who reported a mental health problem and the percentage who had received treatment in the past year. Similarly, around half of both samples reported a sexual health check in the past year, but a significant proportion of the sample reported penetrative sex which may carry risk for HIV/STI transmission. These findings speak to the capacity to scale-up and meet other health needs for these samples. Exploring other health needs (e.g., dental health) will be a focus for future interviews. Social networking sites are reported as a key means of arranging the purchase of drugs, with smaller percentages reporting purchasing drugs on surface net or darknet marketplaces. There have been significant shifts in darknet marketplaces in the past year or so, with a number of major markets opening and closing. Findings from regular monitoring of drugs available on these marketplaces will be released soon by Drug Trends. For the first time, we observed that the percentage reporting recent use of ‘ecstasy’ capsules was greater than all other forms (including ecstasy pills), among the sample who regularly use ecstasy and other illicit stimulants (EDRS). The price of ecstasy capsules and the reported frequency of use also increased. The recent, ‘Inquest into the death of six patrons of NSW music festivals’ showed that in all cases more than one ecstasy pill/capsule was consumed. ‘Double-dropping’ is common among people who use ecstasy in Australia. Indeed, use of more than one pill/capsule is reflected in our sample, with people reporting typical consumption of two pills/capsules, and four in a maximum sample (EDRS). Reports of increasing MDMA purity and emergence of new psychoactive substances of varying potency/effects in Australia highlight the importance of ensuring there are appropriate harm reduction initiatives (including drug checking services) in place. Seven in ten of EDRS participants had attended an Australian music festival in the last year. Nearly all of those who had attended a festival had used alcohol or drugs, and most had used illicit drugs (e.g., MDMA, cocaine, cannabis). One in twenty thought they needed medical help following their illicit use drug use, and 2% sought medical help. This aligns with other research from the Global Drug Survey about drug use specifically at music festivals by people who use illicit drugs.

Most EDRS participants who had attended a festival were aware of on-site medical services and of policing/security strategies like bag checking and patrolling police. A smaller proportion were aware of drug information and harm reduction services at festivals. Music festivals represent a unique setting to engage with people who may not otherwise come into contact with services offering harm reduction information and other health education. There is an opportunity to increase access to, and awareness of, these services at festivals Nearly half of the sample who regularly use ecstasy and other illicit stimulants had tested their illicit drugs; fewer people who injected drugs reported this behaviour. Most people who had used a personal testing kit on a substance acquired as ‘ecstasy/MDMA’ identified MDMA and then used the substance. This finding reinforces previous research showing that people who use illicit drugs want information about the contents of their substance. However, these tests typically only identify the presence or absence of a drug: they do not identify all substances within the tested drug, nor the dose. This information is critical to inform behaviours to reduce harms from, for example, high-dose MDMA or adulterants. Behaviour may differ with more sophisticated testing, and with parallel provision of harm reduction information (as provided with most drug checking services).

People can access free and confidential advice about alcohol and other drugs by calling the National Alcohol and Other Drug Hotline on 1800 250 015.

Please contact the research team (drugtrends@unsw.edu.au) if you are unable to access the full-text versions of any of the documents linked here, have any questions, or have any suggestions for further topics for exploration (or trends we may have missed).